Many portrait photographers wouldn’t think of working with anything shorter than a “normal” focal length. Even more prefer to shoot with nothing less than twice that standard. There’s some very sound reasoning behind both stances and it’s no mystery that the main issue is distortion. On the other hand, there are always good reasons to think outside the box, even in this niche. Let’s explore wide-angle portraiture from a creative perspective. Opening image ©Corentin Hais. All rights reserved.

There are always good reasons to think outside the box…

The Matter of Interpretation

For the purposes of this article, we’ll need to establish definitions for a couple of terms, so that we’re all on the same page. I’ve already used them in the opening paragraph, but they’ve been interpreted differently by various readers. Here are those terms and how they’ll be applied in the upcoming text:

Wide angle: I’m going to skip the math lesson here. You’re welcome. The generally accepted standard for a “normal” DSLR camera lens is 50mm for a full-frame and 35mm for a sensor with a 1.5 – 1.6 crop factor. For this tutorial, though, we’ll use the most widely accepted definitions:

Portrait: Here’s where things get a bit “sketchy”. (No pun intended – maybe.) The traditional definitions of a portrait are based on head shots or head and shoulders shots. For the next few minutes, though, I’d like you to expand your image of the word “portrait” in the same way a wide-angle lens expands your field of view. Let’s include that common conception, but also throw in images that “portray” not just the subject’s physical appearance, but tell a story about the subject. After all, isn’t that what photography is about?

Expand your image of the word “portrait” in the same way a wide-angle lens expands your field of view.

Now that we’ve dispensed with those issues, we can look at some non-traditional portrait ideas that let you bring your wide angle lens to the shoot.

By the way, here’s the lens I recommend you bring, for reasons I’ll explain as we go: the rectilinear, ultra-low distortion Irix 15mm f/2.4: I’m going to get this one out of the way first, because it’s overused to the point that many people are just plain sick of this type of shot. Nevertheless, you can deliberately capitalize on the effects of a short focal length for whimsical portraits. You’re going to need a model with a good sense of humor, and the closer you get, the stronger the effect will be: You can also move far off-center with the camera to foreshorten your subject: With a rectilinear lens like the Irix 15mm, you can minimize barrel distortion effects while retaining the “altered” perspective as in this charming pet portrait:

There’s not much more to say about this type of portraiture except that it can be a lot of fun and if you can come up with a unique idea, you’ll create something that stands out from the thousands of similar shots out there. I think it’s something every portrait photographer should play with, even if it’s to learn what not to do.

After that fun little exercise, it’s time to take a look at the expanded definition of a portrait we discussed earlier. You can often give your viewers an emotional connection to the subjects of your photos by immersing them in the environment. Consider this next image: The stance and expression of the subject in this portrait provide the viewer with a good sense of attitude. By using the 15mm focal length to include the stark surroundings, the shot becomes more of a story of a street fighter, depicting the title, “Give me fight!” well.

You can often give your viewers an emotional connection to the subjects of your photos by immersing them in the environment.

Take a look at this one: 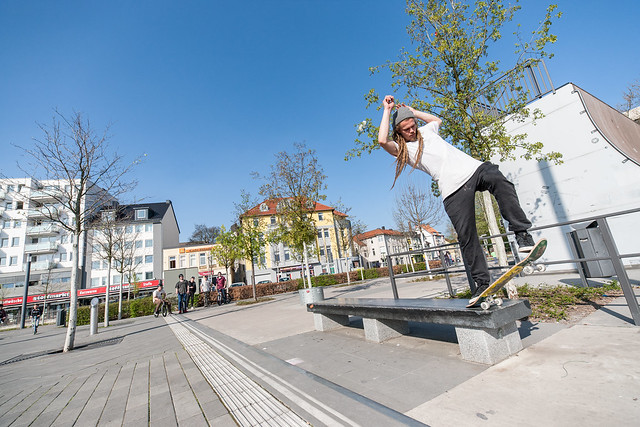 This portrait of a skateboarder not only shows him doing what he enjoys, but the wide angle shows him under the scrutiny of other young people on bicycles. Are they admiring his form? Laughing behind his back? The viewer gets to determine the answers, but without the wide angle it would be just another sports portrait.

When working in an interesting location or at an event, a wider field of view can give you some room to work with the framing in post-processing your photos. This is a good way to work when you don’t have lots of time to frame a shot.

Here’s an example taken during a carnival parade in France, captured at 15mm, then cropped to suit:

The black and white image below was also captured at 15mm, then cropped slightly to show the man and his dog in their environment, with some nice convergence to give the image tons of depth: 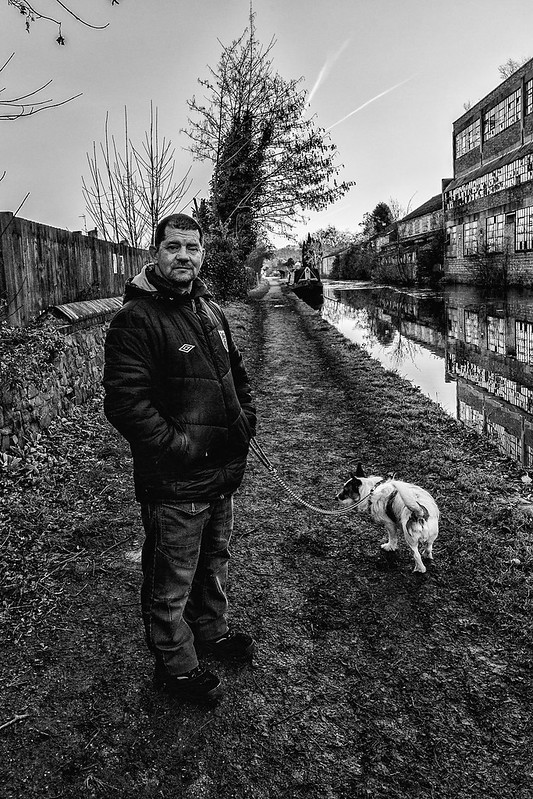 This type of photography is something of a crossover between the portrait and street or event genres and it’s not only popular, it’s a great way to show people as who they are. It’s also a great opportunity to go wide.

Here’s a portrait of a photographer doing what he does: 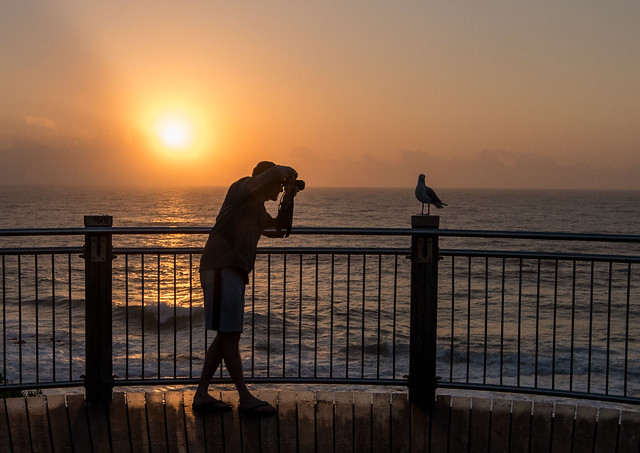 This one shows a Jamaican lifeguard busy overseeing a water slide: How about a spelunker exploring an immense cavern? 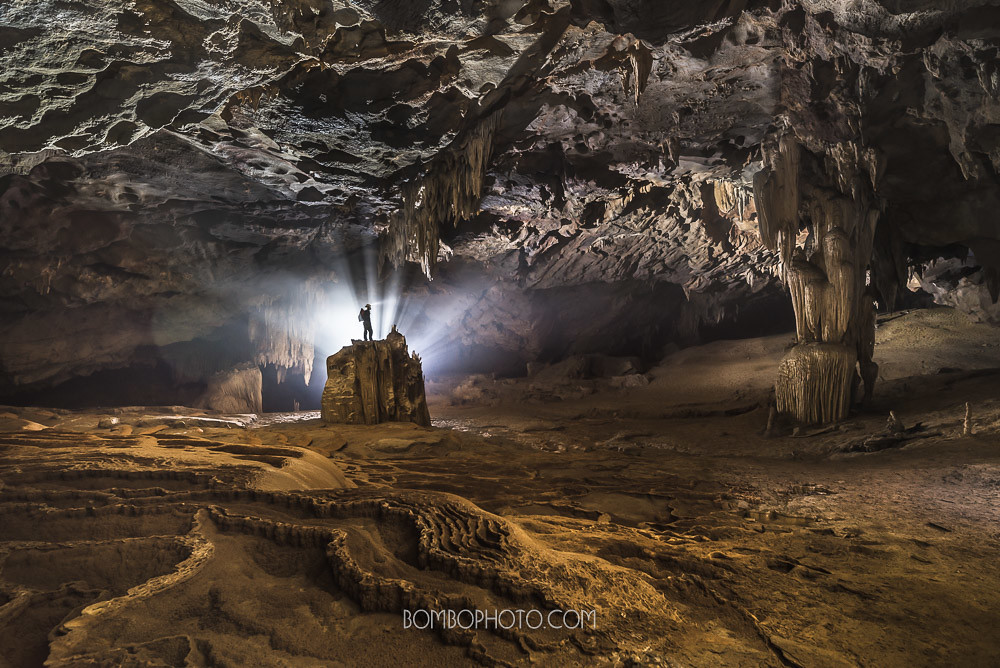 OK, I hear you. Is that last one a portrait, a landscape or a travel shot? Obviously, the answer is subjective and most might consider calling it a portrait a stretch. On the other hand, what do you think the guy standing on that rock would call it?

Just Take it Along!

I could show you hundreds of other good examples of wide angle portraits, from weddings to wakes, but my purpose here isn’t to demonstrate but to motivate. If you’re unsure about the idea of shooting portraits with shorter focal lengths, get out there and give it a try. I think you’ll find a new way to connect with your subjects and a whole list of creative paths just waiting to be explored.

…a new way to connect with your subjects and a whole list of creative paths just waiting to be explored.

If you’d like to give it a try with a professional-quality, rectilinear wide-angle lens that you won’t have to take out a loan to buy, check out what Irix has to offer. You’ll find full specs, descriptions and pricing on the IrixUSA website.